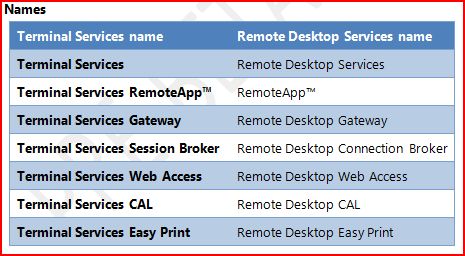 Improved RemoteApp and Desktop Connections
New RemoteApp & Desktop Connection (RAD) feeds provide a set of resources, such as RemoteApp programs and Remote Desktops. These feeds are presented to Windows 7 users via the new RemoteApp & Desktop Connection control panel, and resources are tightly integrated into both the Start menu and the system tray.
The improved RemoteApp and Desktop Connections features in Windows Server 2008 R2 and Windows 7 provide the following improvements:
• Extends Remote Desktop Services to provide tools to enable VDI. The in-box Remote Desktop Services capability is targeted at low-complexity deployments and as a platform for partner solutions, which can extend scalability and manageability to address the needs of more demanding enterprise deployments. VDI includes the following technologies to provide a comprehensive solution:
• Hyper-V™
• Live Migration
• System Center Virtual Machine Manager 2008
• Microsoft Application Virtualization version 4.5 in Microsoft Desktop Optimization Pack (MDOP).
• Vista Enterprise VECD licensing
• Provides simplified publishing of, and access to, remote desktops and applications.  The feeds described above provide access in Windows 7, but using  the new RemoteApp & Desktop Web

Access, users will also be able connect to these resources from Windows Vista and Windows XP.
• Improved integration with Windows 7 user interface. Once accessed, RAD-delivered programs and desktops show up in the Start Menu with the same look and feel of locally installed applications.
A new System Tray icon shows connectivity status to all the remote desktop and RemoteApp connections to which the user is currently subscribed. The experience is designed so that many users won’t be able to tell the difference between a local and remote application. 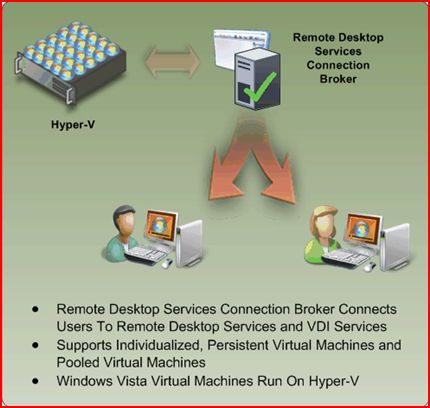 • Multimedia Redirection: Provides high-quality multimedia by redirecting multimedia files and streams so that audio and video content is sent in its original format from the server to the client and rendered using the client’s local media playback capabilities.

• True multiple monitor support: Enables support for up to 10 monitors in almost any size, resolution or layout with RemoteApp and remote desktops; applications will behave just like they do when running locally in multi-monitor configurations.

• Aero Glass support: VDI provides users with the ability to use the AeroGlass UI for client desktops; ensuring that remote desktop sessions look and feel like local desktop sessions.

• Direct X redirection: DirectX 9, 10 and 11 applications will render on the server and will be remoted using bitmaps (requiring Direct3D-compatible hardware).  If the application supports the new DirectX 10.1 API with remoting extensions the DirectX (2D& 3D) graphics are redirected to the local client to harness the power of the GPU on the user’s local device, removing the need for a GPU on the server.

• Improved audio/video synchronization: RDP improvements in Windows Server 2008 R2 are designed to provide closer synchronization of audio and video in most scenarios.

• Task Scheduler: This adds the ability in Task Scheduler to ensure that scheduled applications never appear to users connecting with RemoteApp. This reduces user confusion.

• Single administrative infrastructure. Both RemoteApp & Desktop connections and RemoteApp and Desktop Web Access are managed from a single management console. This ensures that connections can still be used from Windows XP and Vista by using a Web page.

• Always up to date. Once a workspace is configured, that workspace keeps itself up to date until it is removed from the user’s desktop. When an admin adds an application or update it automatically appears on users’ Start menu and via that user’s Web Access page.

• Single sign-on experience within a workspace. Ensures that only a single logon is required to access all applications and resources with a RAD connection.

• RemoteApp & Desktop Web Access. This capability provides full integration with RemoteApp & Desktop Connections to ensure a consistent list of applications is available to the user at all times, no matter the desktop OS used. The default web page provides a fresh and inviting look and feel and includes a new Web-based login with integrated single sign-on. 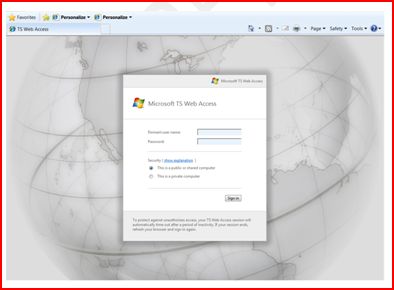